Was it simply a moment of frank honesty from a guy trying to get the job done or was it an excellent example of political suicide?

Much has been said about Mr Abbot’s interview on The 7.30 Report where he accidentally volunteered the opinion that he sometimes doesn’t tell the truth. He said:

”I know politicians are going to be judged on everything they say, but sometimes, in the heat of discussion, you go a little bit further than you would if it was an absolutely calm, considered, prepared, scripted remark, which is one of the reasons why the statements that need to be taken absolutely as gospel truth is those carefully prepared scripted remarks.”

You can watch the video here:

Julia Gillard jumped at the chance to ask Mr Abbott if he was “Gospel Truth Tony or Phoney Tony”! Ouch!

I often get asked to comment on politicians and their public speaking blunders and I mostly decline the invitation. I mean public speaking is one of the biggest fears in the world for most people. Most people would sooner poke themselves in the eye than give a speech on The 7.30 Report. Politicians speak under one of two circumstances most of the time:

1. They are either reading from a “carefully considered prepared, scripted remark” (Mr Abbott’s words), that they didn’t write themself, or

2. They are being asked questions about any tiny little thing in their entire political portfolio (including comments they made 10 years ago). I don’t know about you, I can’t remember what I said last week, let alone what I said 10 years ago!

How difficult it is to sound confident, charismatic and to remain cool headed under either circumstance.

Here are the three Ps for you to remember as presenter to avoid having a similar outcome in your presentations:

1. Plan – A degree of discretion and thought is required when we deliver an impromptu speech. It’s essential that we ensure our brain is engaged before our mouth goes into gear!

3. Pause – pause is powerful and you must do it more! When you pause, the audience uses the silence to process what you’ve just said. It gives you extra time to compose yourself and your answer. And it helps you sound considered and respectful. Pause is Powerful! So try planning pauses into your speech.

Use the three Ps and you’ll say what you want to say, not get railroaded into saying something that’s contra to your point. You’ll also avoid an embarrassing result – unlike Mr Abbott.


Book onto a
Public Program 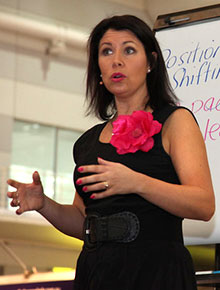 Find out more >>
Check dates in your city >>

Read the first chapter of the book FREE here! >>

"There is no other book on the market like this that will take you step-by-step through the process of successful presenting."-
Steve Weston, MD Retail Lending,
Barclays Bank